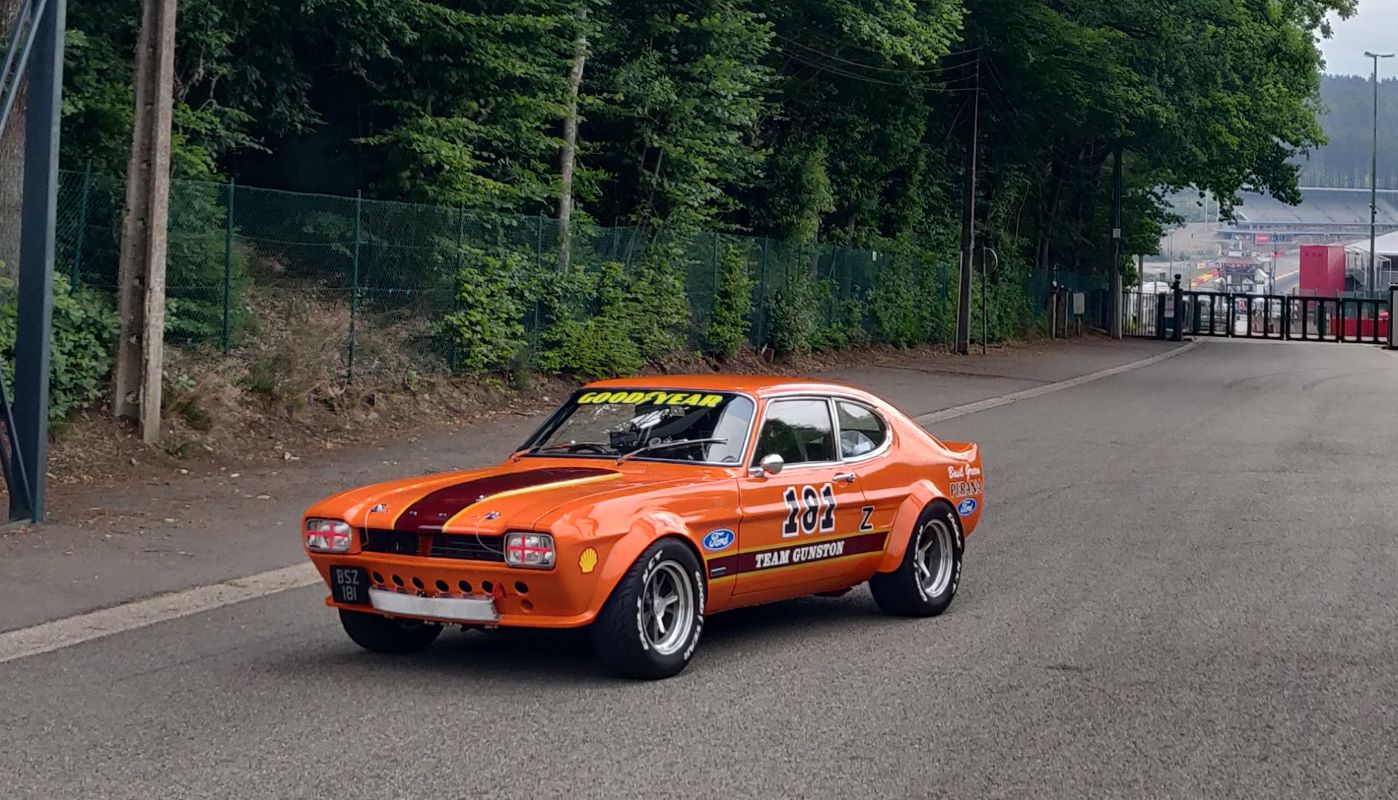 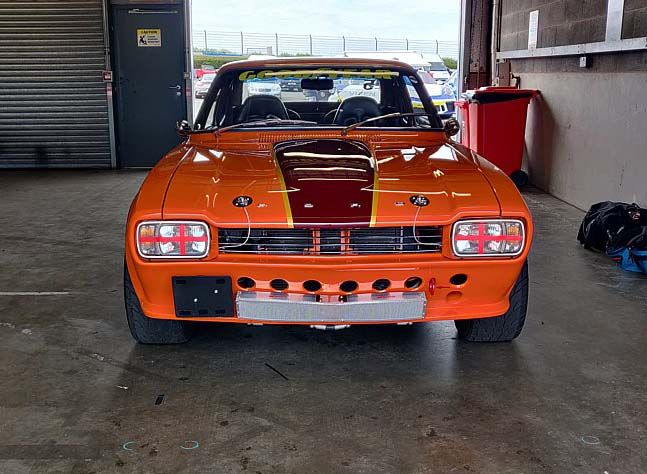 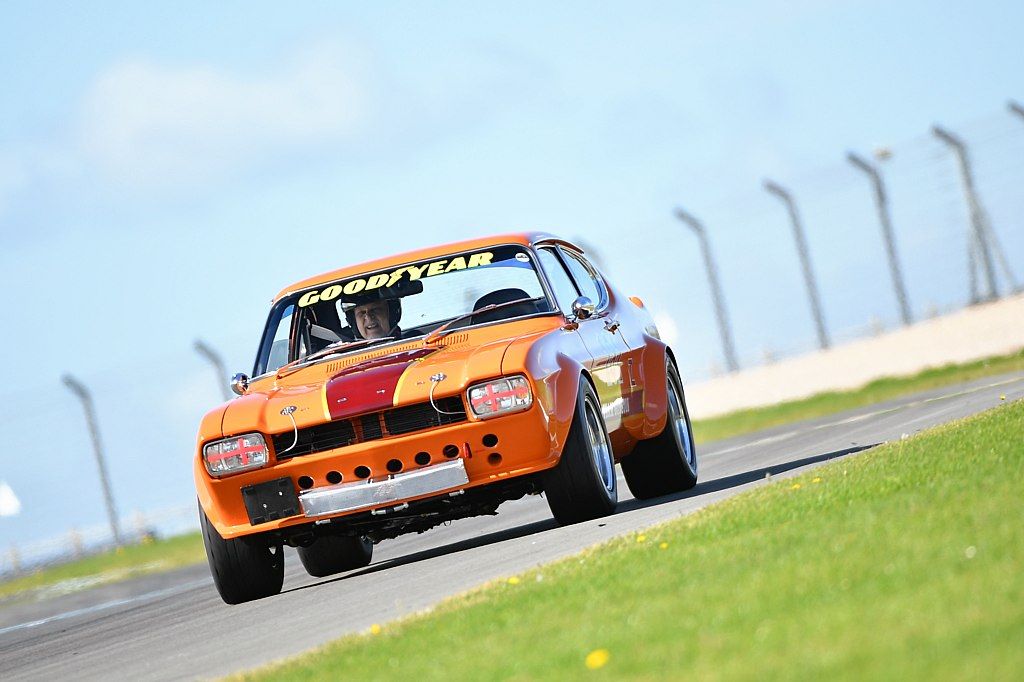 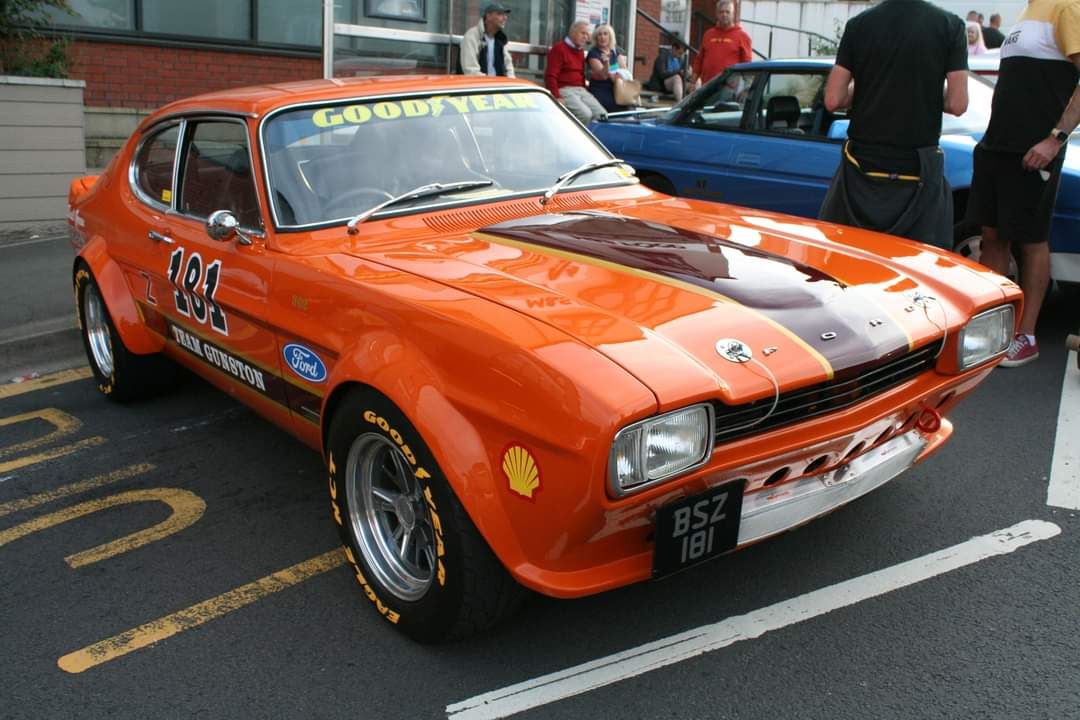 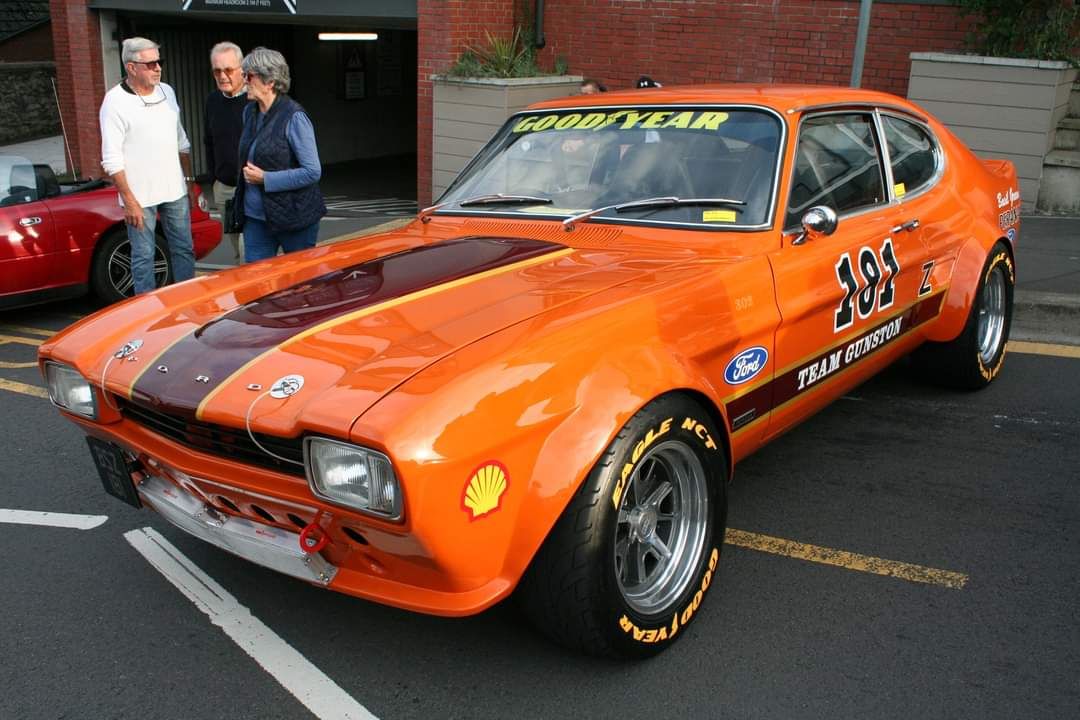 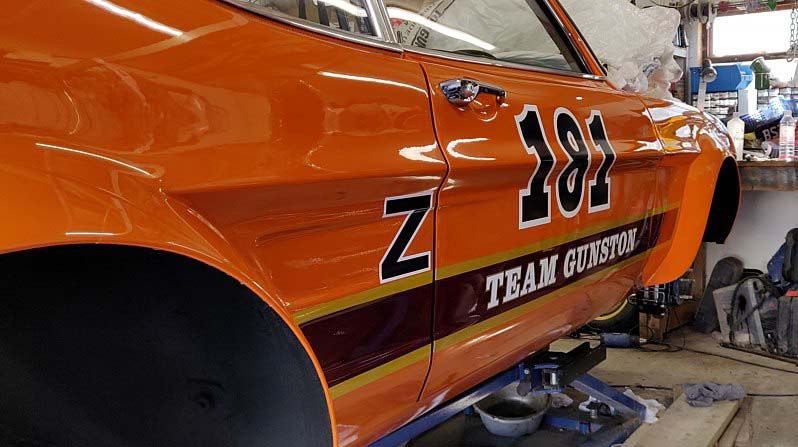 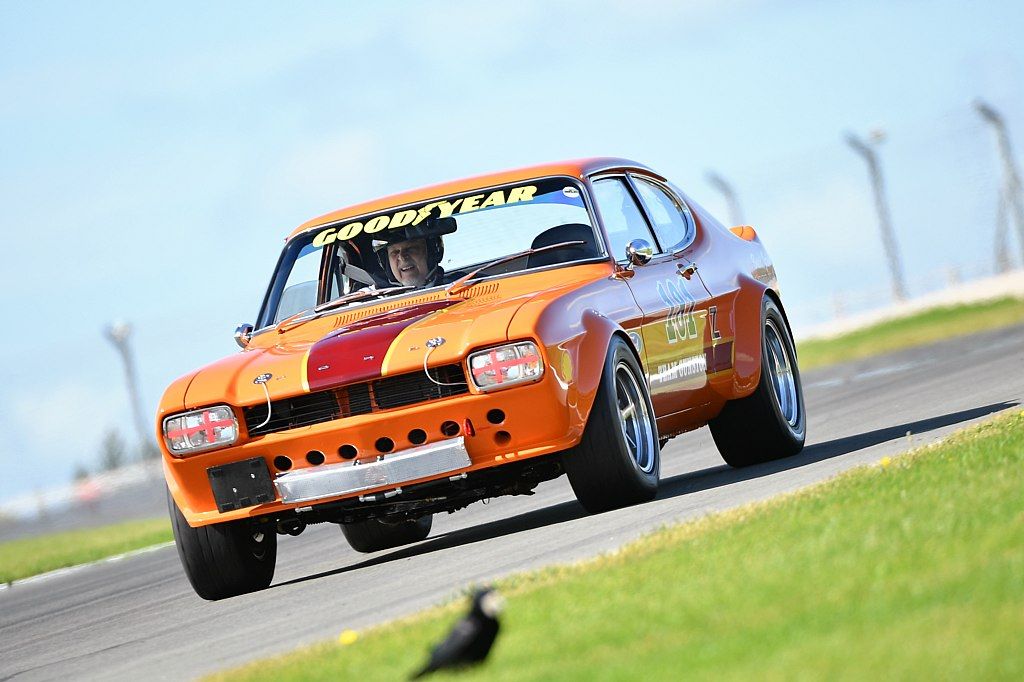 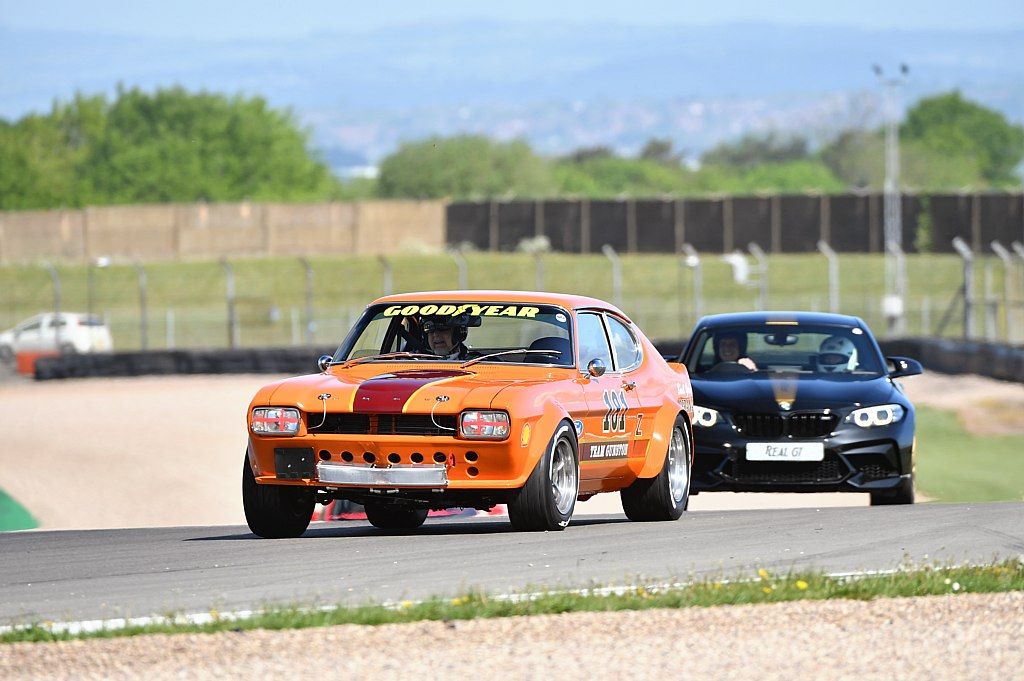 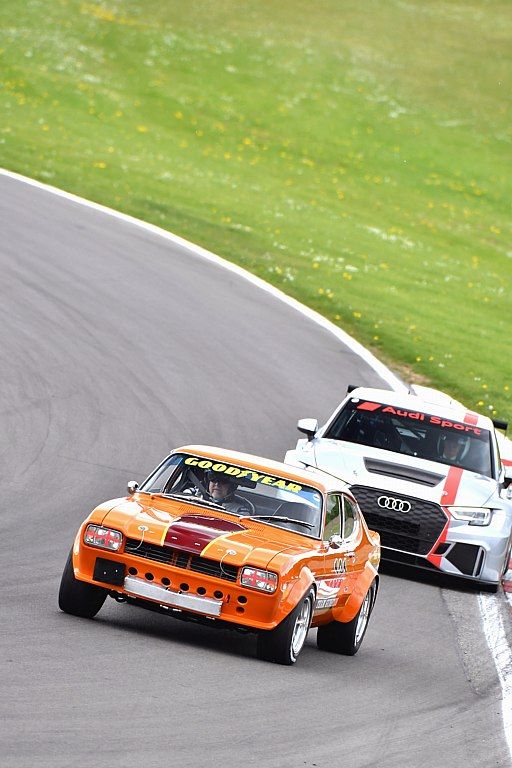 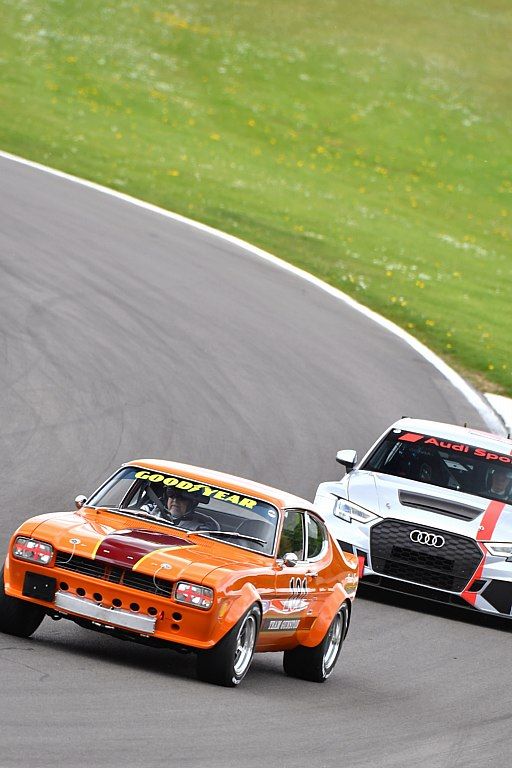 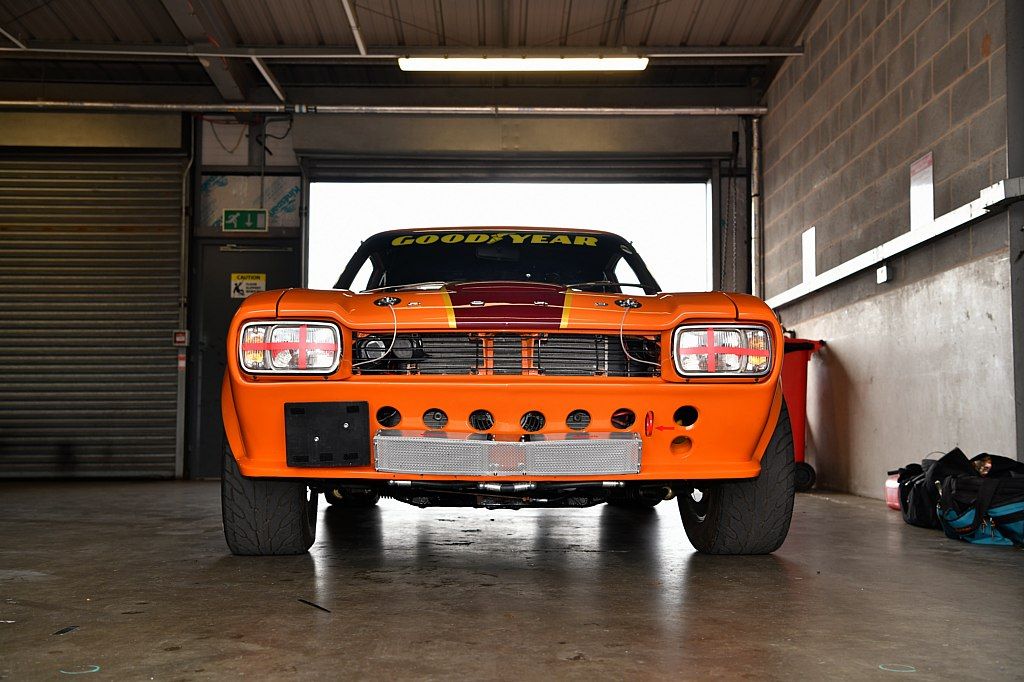 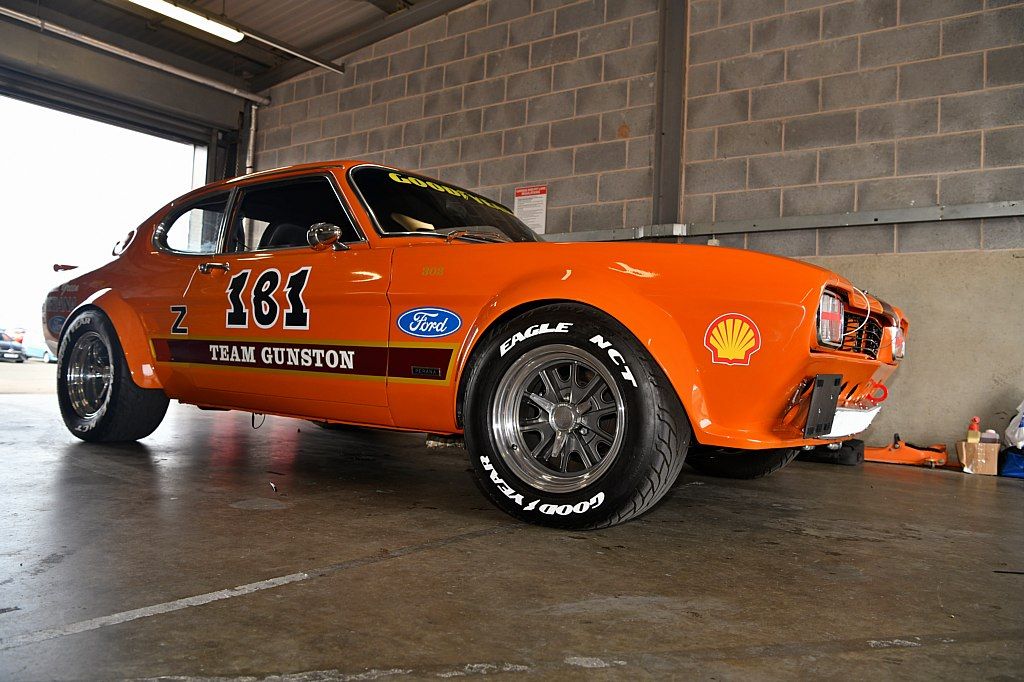 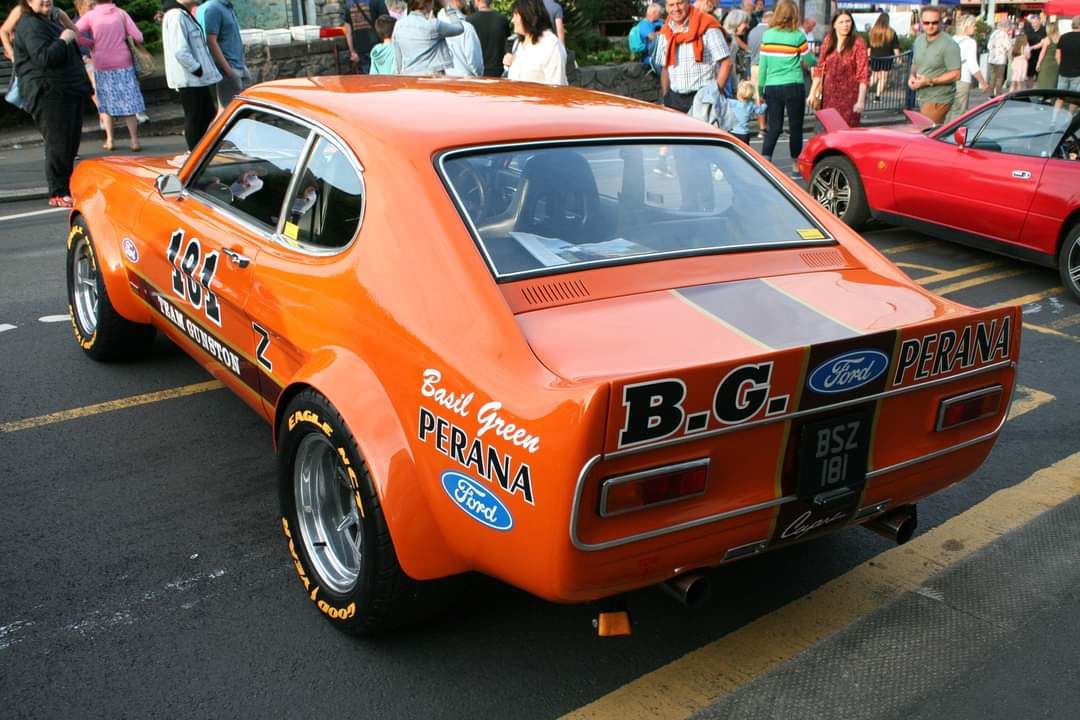 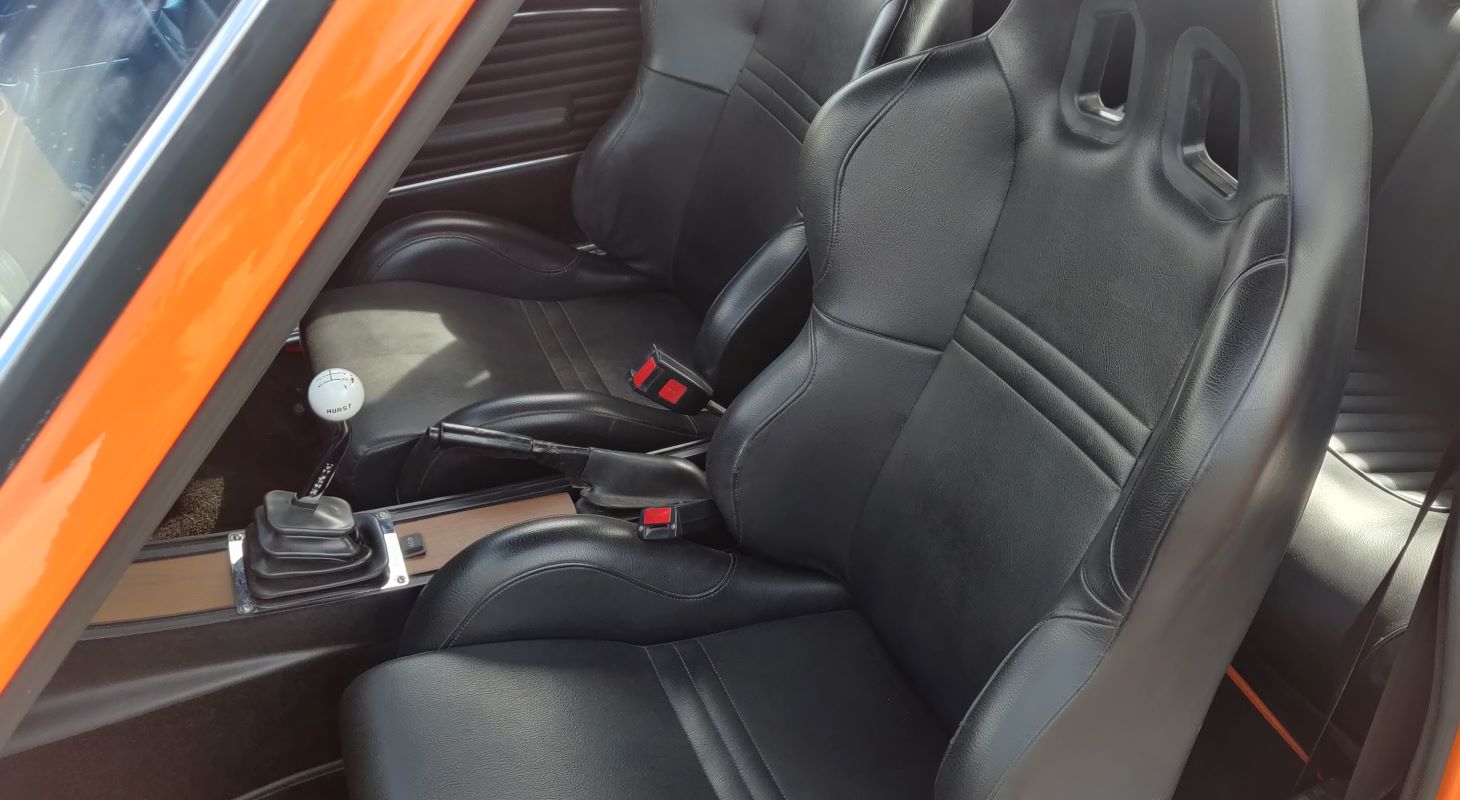 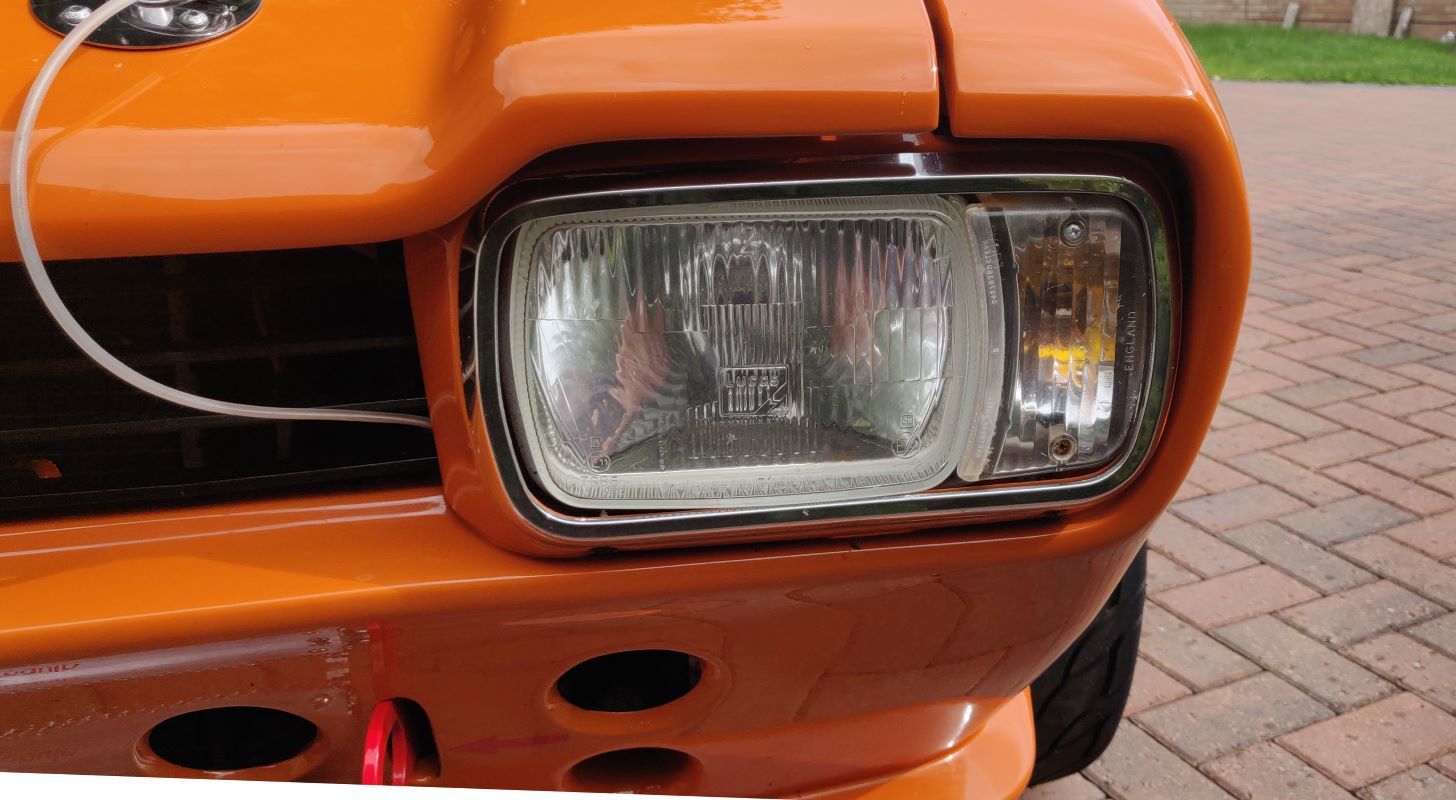 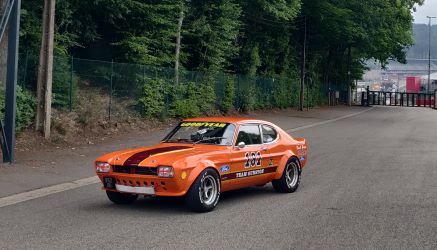 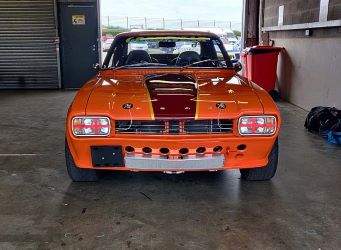 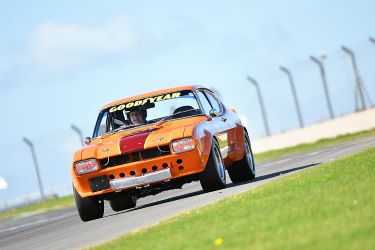 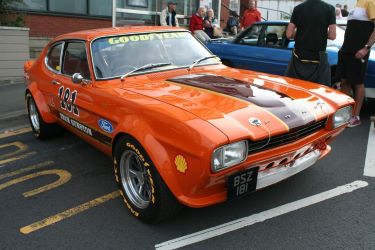 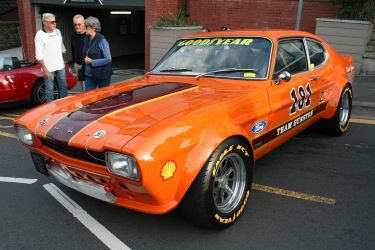 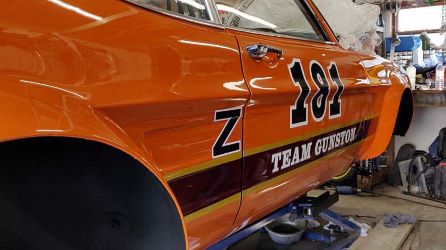 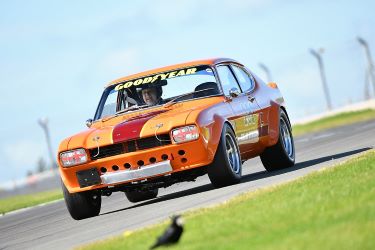 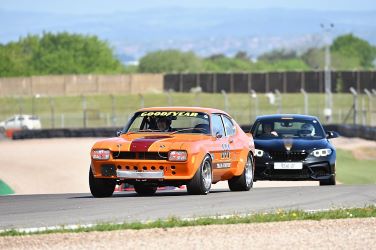 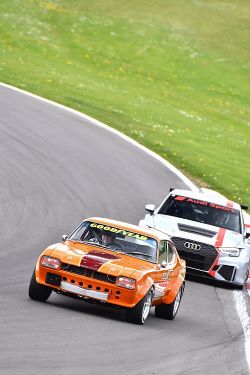 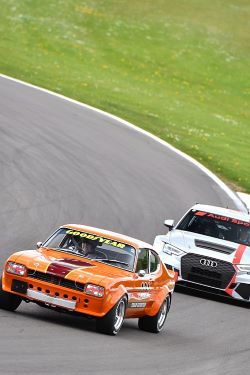 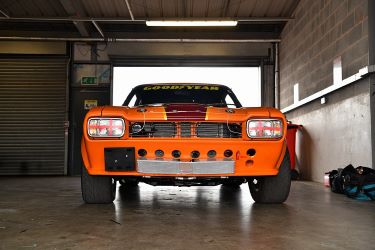 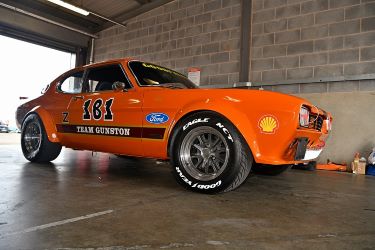 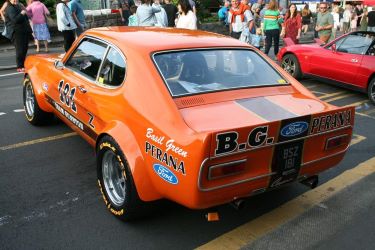 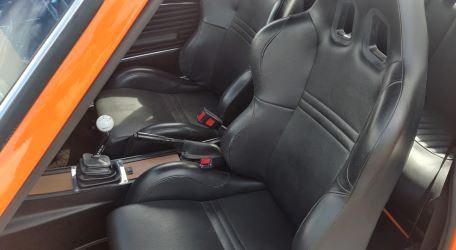 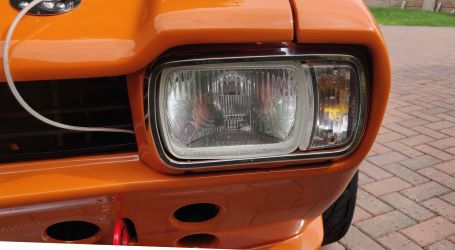 For sale is a Capri Gunston Perana creation. It is based on the original Gunston race car known as Z181 in Cape Town South Africa from 1970 It is a road going race replica.

The genius behind the Perana marque was Basil Green from Edenvale near Johannesburg.

Basil Green was to Capri what Carroll Shelby was to Mustang. He imagined big and thought outside the box. Sadly Basil died on June 27th 2022.

Green decided to make a Capri drive like it should with a Ford V8 motor. So Basil flew to America and acquired a full GT40 running gear and engine. Back to Edenvale South Africa and into a 3 litre Capri shell with the GT40 motor, the gearbox and front suspension. A legend was born. The Gunston Capri began its journey and earned its fire breathing legendary status on the tracks at Kyalami, Zwartkops and Killarney Cape Town. A measure of its success was such it got banned after the first season for the crime of being too fast for the other competitors.

The owner has already built and sold the Capri Gunston replica known as A2 back in 2010.

The owner's creations are meant for driving. On roads. On tracks. Short haul and long European trips. Boxes ticked with my first replica. The Z181 creation featured in RetroFord magazine on 7th July 2022 in the August edition.

In 2016 this current car was imported to UK and got hooked straight away when I heard that V8 fire up.

· Glass - all NOS original Triplex as per the original Capri 3.0 - even a heated rear window!

· The wheel arches are hand made all steel and were grafted into the car after I had already painted it once! Why? Because knew it just didn't look like Z181 with Golf GTi MK1 arches and tiny 15 inch 7 J wheels.

· So, many months and many pounds later the car is now an aesthetically pleasing Z181 replica.

· The interior is as near standard Capri 3.0 as I could make it. Soundproofed, carpetted, all new door cards, original dash, clock set plus a few additions like mechanical temperature gauge, accurate fuel gauge gizmo and a few cut out switches.

· The steering was tiresome without assistance so I used a Capri 2.8 X-member, power rack and electric power pump. All plumbed in and makes the car complete.

It was designed to look the part, sound the part, go the part, but had to be roadable and comfortable. Boxes ticked!!!

The roll cage was removed. It can easily be fitted with a full 6 point cage if the next owner so desires.

The paint incidentally is faithful to the Gunston Orange, plum and rich pale gold used on the original cars. The owner sourced the paint whilst in Wynberg South Africa.

The owner has combined the authenticity of a 53 year old car with modern upgrades, mainly Ford OEM parts and a few tweaks.

Could it be raced? I suppose it could with roll cage, stripped interior and some carburation tweaks.

Owner is selling due to space needed for another project! Don't miss out on this stunning car.
Bid now!!

A problem with your internet connection has been detected.
We'll reconnect you as soon as we can.

Get a quote for delivery straight to your home or garage with our partner ShipMyCar:

When the auction is open, you can place bids in line with the pre-determined bid increment levels using the bid increase (+) and bid decrease (–) buttons provided.

There are 2 ways you can bid your chosen amount - either by setting a maximum (proxy) bid or by placing an instant bid. It is important that you understand the differences between the two methods by reading the detailed explanations below.

Every time you place a bid you will be asked to confirm your bid before submitting it, and you will be clearly shown on the screen whether your bid was successful.

A full list of all bids placed is displayed in the bid history table.

You are not restricted to placing a bid at the minimum bid amount, but can instead increase your bid and place a maximum (proxy) bid in the system. By setting a maximum bid, the system will automatically bid on your behalf to maintain your position as the highest bidder, up to your maximum bid amount. If you are outbid, you will be notified via email so you can opt to increase your bid if you so choose.

If two or more users place identical bids, the bid that was placed first takes precedence, and this includes proxy bids.

The 'Place Instant Bid' button will place an immediate bid for the amount specified. By using this feature you could end up paying more than you need to.

Virtually every lot is sold subject to a reserve price (the minimum price that the auctioneer is authorised to sell for). When you submit a maximum bid, the actual bid placed by the system will depend on whether the reserve price has been met, as defined below.

If your maximum bid is below the reserve price

If your maximum bid is at or above the reserve price

NB : Your maximum bid is kept completely confidential – it's presence or amount are not disclosed to the auctioneer, vendor or any other bidder.

NB: Do not leave placing your bid to the last few seconds. It gives you no advantage, you risk your bid not being received by the server in time and you could lose the lot to another bidder.

NB: Please note that the way the bidding works may vary slightly from auctioneer to auctioneer. We strongly advise you to read the bidding guide for any auction you plan to bid on.

By setting a proxy bid, the system will automatically bid on your behalf to maintain your position as the highest bidder, up to your proxy bid amount. If you are outbid, you will be notified via email so you can opt to increase your bid if you so choose.

If two of more users place identical bids, the bid that was placed first takes precedence, and this includes proxy bids.

Another bidder placed an automatic proxy bid greater or equal to the bid you have just placed. You will need to bid again to stand a chance of winning.

Your browser became disconnected from the server, and despite several attempts it was unable to reconnect.
Please check your internet connection to ensure that you are still connected.